Supermodelli supplied all the aesthetic models for this product launch. 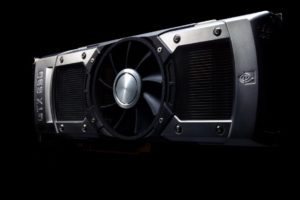 When NVIDIA set out to build the Kepler GPU architecture more than four years ago, our primary focus was power efficiency. We found that processors were increasingly being limited by the amount of power they could consume and dissipate. The only way to improve performance was to be able to do more work with the same amount of power.

That was our focus with Kepler, and when the GeForce GTX 680 launched last month, reviewers praised not only its record-setting performance, but also its incredible power efficiency.

Bjorn3D, a website that has tested graphics cards since the Voodoo era, summed it up nicely when it said: “Not only is the Nvidia GeForce GTX 680 the fastest single GPU card, but it is also the most power efficient and quietest high-end flagship card we have ever tested here at Bjorn3D.”

While power efficiency is important to high-performance graphics cards, it becomes critical when building dual-GPU graphics cards. Here, two GPUs must vie for a finite amount of power, cooling, and board space. And it is here that Kepler shines the most.

The new GeForce GTX 690 is NVIDIA’s flagship graphics card. Powered by two Kepler GPUs, it’s both a record setter in 3D performance and incredibly power efficient. In fact, the GeForce GTX 690’s performance is almost identical to a pair of GeForce GTX 680s in SLI, but with significantly reduced power and noise.

Not content with delivering only raw performance, our engineers went a step further. From Ferrari’s F12 Berlinetta to the B&W’s Nautilus loudspeaker, the flagship of any product category is invariably as much about form as it is about function. With the GeForce GTX 690, our engineers and industrial designers set out to create a new visual aesthetic to express the raw, uncompromising power of a dual-GPU Kepler graphics card.

The industrial design of the GeForce GTX 690 is a direct reflection of what lies beneath the cover: two Kepler GPUs, tremendous graphics horsepower, and a product of exceptional longevity. Visually, the design draws parallels to an F1 engine block with its raw metal look and exposed fin stacks.

The card’s front plate is composed of two different materials. The exterior frame is made of cast aluminum with trivalent chromium plating, giving the board a durable, matte finish. The central fan housing is created from injection molded magnesium alloy. Magnesium alloys are used throughout the automotive and aerospace industry (including the engines of the Bugatti Veyron and F-22 Raptor) for their light weight, heat dissipation, and acoustic dampening properties. To create the intricate geometries required for the fan housing, we used a form of injection molding called thixomolding, in which liquid magnesium alloy is injected into a mold. This allows us to create fine geometries and a tight, perfectly coupled fit.